Beginning in 1978, the Dakota String Quartet presented concerts and workshops throughout a five-state region, making strings “a natural resource” for our state. The diverse backgrounds of the Dakota String Quartet magically meld and create a superior ensemble. The majority of the ensemble’s time is spent on tour, performing at concert halls, colleges, community centers and public schools. Through their individual roles as string principals in the South Dakota Symphony Orchestra, they bring music enrichment and leadership to people of all ages.

Doosook Kim has been Concertmaster with the SDSO since 1995. Dr. Kim was invited to join the Orchestre des Régions Européennes and performed in Germany and France and regularly travels to Korea to perform and teach.

Magdalena Modzelewska started playing violin at age six and attended career oriented music schools in her native Poland. She enjoyed an extensive solo and chamber music career in Europe, performing in Poland, Germany, England, France, and Switzerland before moving to the United States in 1998 to join the South Dakota Symphony Orchestra as principal second violinist. She founded Flower and Flame, a project that joins music with dramatic storytelling, and she also plays Celtic fiddle in Maggie in the Meantime. Magdalena is a certified Suzuki instructor and maintains a private teaching studio, she also teaches at Augustana University in Sioux Falls, SD.

Yi-Chun Lin, a native of Taipei, Taiwan, violinist, violist, and pianist, Ms. Lin was appointed Principal Viola in 2018. She has performed as soloist with the Texas Music Festival Orchestra, the National Taiwan Symphony Orchestra in Taiwan, and the Akademische Orchester at the Gewanhaus concert hall in Leipzig.

Jia Cao was appointed Principal Cello in April 2015. She received her undergraduate degrees in Music and Social Studies from Bard College, and MM and AD from Yale University. 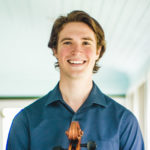 Cellist Robert Erhard joins the South Dakota Symphony as acting principal cello and cellist of the Dakota String Quartet for the 2019-20 season. Robert holds a BM from CU Boulder where he studied with Judith Glyde and Thomas Heinrich, and an MM from Eastman School of Music.