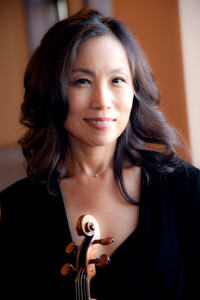 Described as “a legacy…the highest performance level…dedicated, extremely talented, technically endowed…a fully purposed violin soloist and chamber musician…” by one of her own teachers, Doosook Kim is appointed Concertmaster of the South Dakota Symphony Orchestra and First Violinist of the Dakota String Quartet. Since her appointment in 1995, Kim has appeared as soloist for the SDSO, as a chamber musician, and as a music educator in South Dakota, the neighboring states, and abroad in Europe and Korea.

Kim, a native of Korea, started her musical training by beginning to play the piano at the age of four and the violin at seven. As she studied with the most prominent teacher in Korea, Chong-Suk Li, the main aspects of her training took place in the tradition of the well-known German pedagogues Carl Flesch and Max Rostal.

While completing her degrees at Seoul National University and Arizona State University, Kim has studied with C. Li and Frank Spinosa and worked with many prominent musicians such as Mstislav Rostropovich, Max Rostal, Pinchas Zuckerman, Joseph Silverstein, Eugene Lehner (founder of the Juilliard String Quartet), and Joel Smirnoff.

As a soloist and chamber musician, Kim has performed extensively in the United States and abroad, including Germany, France, Italy, and Korea. Recently she had appeared as a soloist of Cantabile Chamber Orchestra in the past summers in Korea. Kim has played with numerous orchestras and ensembles such as Orchestre des Régions Européennes, Seoul Philharmonic Orchestra, Phoenix Symphony, Arizona Opera, Tempe Symphony, and the Omega String Quartet, as well as the Tanglewood Music Festival, Spoleto Festival, and Colorado Music Festival Orchestra.

Formerly on the faculty of Augustana College and the University of Sioux Falls, Kim currently dedicates her energy to exclusively teaching private students in Sioux Falls area and in Korea in the summer. Kim plays Francesco Ruggeri dated 1686 in Cremona.