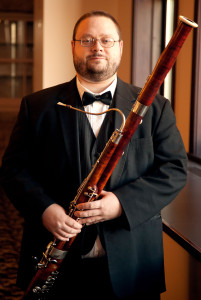 John Tomkins was appointed Principal Bassoon of the South Dakota Symphony Orchestra and Dakota Wind Quintet in 2002.  He has earned degrees from The Ohio State University and The Cleveland Institute of Music.  His primary instructors were John Clouser, Christopher Weait, Ronald Phillips, and Joseph Hesseman.  He has attended several summer music festivals, including The Conductor’s Retreat at Medowmak, The Festival-Institute at Round Top, Kent-Blossom Music, The National Orchestral Institute, and Tanglewood Music Center.  Tomkins also serves as Principal Bassoon of The Sioux City Symphony Orchectra and is the Bassoon Instructor at Augustana College and Sioux Falls University.