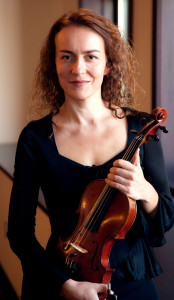 Magdalena Modzelewska was born in Krakow, Poland, and started playing the violin at the age of six.  After attending music schools designed for gifted, career-oriented musicians, she went to the Music Academy in Wroclaw, Poland where she got her Master’s Degree in violin performance in the class of Russian virtuoso Victor Kuzniecov.  She also studied with Wanda Wilkomirska and Roman Lasocki.  Modzelewska has extensive chamber music performance experience.  She performed frequently at the 1998 European Mozart Academy, a seven week intensive chamber music program.  In the years 1995 – 1998 she was a soloist with the Pressburger Kammersolisten, a touring chamber ensemble that gives performances in France, Germany and Switzerland throughout the year.  She has also performed with Polish chamber orchestras, Wratislavia in Warsaw, and Ricordanza in Wroclaw, both of which are Poland’s premier chamber orchestras.

In 1994 Modzelewska participated in a special Polish-German Orchestral Project in Weimar, Germany.  She has attended various summer music festivals in Europe, including the International Music Festival in Lancut, Poland and the Sevenoaks Summer Festival in England.  Modzelewska has been a member of the South Dakota Symphony Orchestra and the Dakota String Quartet since 1998, she also taught violin at Augustana College in Sioux Falls, maintains a private teaching studio and is a certified Suzuki instructor.  In 2002 she created a musical project Flower and Flame with the purpose of joining her artistic experiences from all over the world.  She also enjoys playing Irish fiddle in “Maggie in the Meantime”, a group that she co-founded.